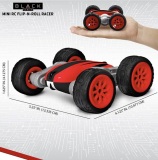 BRING ON THE FUN FOR YOUR KIDS

Does your child have a need for speed? Want an action-packed toy that'll deliver the thrills?

The rugged all terrain rubber tires also allows the Flip 'N Roll Racer Toy Car to take on the dirt, pavement, sidewalk, and much more with precise movement and navigation.

MADE TO RULE THE ROAD

Rugged all-terrain tires to grip the pavement, dirt, and much more

Add to Cart
Powered by